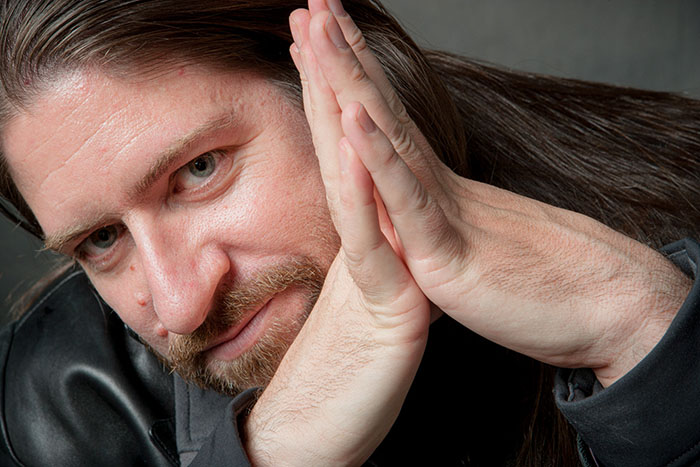 John Paul Caponigro is an internationally collected visual artist (Smithsonian, Princeton, Estee Lauder) and published writer (Apple, Huffington Post, Camera Arts) who leads unique adventures in the wildest places on earth to help participants creatively make deeper connections with nature and themselves. Get a taste of what he does in his Google and TEDx talks.

A form of environmental art in virtual space, John Paul Caponigro’s works are about the nature of perception and perception of nature.

Exhibited internationally, his works have been purchased by private and public collections including The Estee Lauder Collection, Princeton University, and The Smithsonian.

John Paul is a pioneer among visual artists working with digital media. He consults with the corporations that build the tools he uses including Adobe, Apple, Canon, Kodak, and Sony. A member of the Photoshop Hall of Fame, Epson’s Stylus Pros, and X-Rite’s Coloratti, his work is published widely in periodicals and books including Art News and The Ansel Adams Guide.

Author of the video training series R/Evolution and the book Adobe Photoshop Master Class, for over twenty years he has been a contributing editor to a variety of magazines and websites including Camera Arts, Digital Photo Pro, The Huffington Post, and Apple.

John Paul grew up in an artistic family. His father is a black-and-white fine art photographer and his mother is a painter and graphic designer. They introduced him to countless photographers, artists, musicians, writers, dealers, and curators including Ansel Adams and Georgia O’Keefe. The most important thing he learned is that everyone is different – and that’s wonderful.

At the age of two, John Paul almost got his family evicted from their Dublin apartment when he began making murals. His parents quickly paper-trained him.

John Paul’s fascination with moving pictures and the sequential arts led him to a brief stint as an illustrator. He even drew for Marvel and DC comics. These drafting and storytelling skills remain an integral part of his creative process today.

At a young age, John Paul was once caught snooping in Ansel Adam’s camera bag looking for the “cloud stick” he heard his parents joking about. John Paul got his own cloud stick in 1990; it’s called Photoshop.

John Paul’s first introduction to digital imaging came when his mother oversaw the printing of Eliot Porter’s Intimate Landscapes book (1979). He instantly wanted what she called a “million-dollar coloring book.” Photoshop (1990) was a dream come true.

John Paul was the first digital printing instructor at Maine Media Workshops, Santa Fe Workshops, Palm Beach Photographic Center, and Rocky Mountain School Of Photography. He was one of five artists selected to lead the Epson Print Academy. Having taught thousands over thirty years, he now teaches his premiere digital printing workshops in his private studio.

John Paul’s first iPhone is in the collection of the Smithsonian, along with the most interesting collection of his works, including prints in every medium he has used.

John Paul’s conversations with other photographers are part of the George Eastman House’s permanent collection.

John Paul collects photographs, trading with many of the artists he meets – Arnold Newman, George Tice, Joyce Tenneson, and many others.

John Paul has traveled to all seven continents and all five oceans; he calls years he travels to both Greenland and Antarctica bipolar years.

My life’s work is dedicated to inspiring conscientious creative interaction with our environment.
Authentic creativity is the key to unlocking solutions for the most pressing issues of our times.
Each of us has unique and valuable contributions to make during this critical era of rapid change.
I urge you to make yours now.
I’m here to help.